Good timing. I was thinking about tri-tip myself recently and am getting one from The Meat Shop to make this weekend. They will sell it with the cap on. Plan to grill it direct like a steak but with some smoking wood thrown in with the charcoal as well. Have done that before and it came out great.
Top

Mmm, tri-tip. Rub that sucker down with salt, pepper, and garlic. Serve it with a big green salad with Catalina dressing, some garlic bread that's grilled after the tri-tip so it picks up some of the meat flavor, and some baked beans that have almost as much pork product as beans themselves, and you've got a MEAL.
Top

I came across a discussion about the tri-tip fat cap on smokingmeatforums.com, and the consensus seemed to be that you should remove the fat cap. The main reason is to remove the silver skin underneath. But another comment that made sense to me is that it's a small enough cut of meat that even at low temps, the meat cooks too quickly for the fat cap to be of any benefit (my large-ish tri tip took just over an hour to reach 127; it was at room temp when I started it). The other benefit of removing the cap is that you can season the entire cut and apply smoke to the entire cut.

I'd love to know how things turns out if anyone does cook one with the fat cap on.


On last nights BBQ Pitmasters, they had a tri tip and all three of the competitors trimmed pretty much it all off and the three judges all said they trim it all off as well. The most important thing is that silver skin.
- smokingmeatforums.com

So the way I recall cooking it last time was starting over indirect heat with the cap on and then I trimmed it right before throwing it right over the coals to finish searing it. It's been a couple of years but I seemed to recall that it worked pretty well.
Top

Banh mi, using the lemongrass pork recipe from Andrea Nguyen's new Banh Mi Handbook. The lemongrass flavor was lost in the sandwich itself, but the pork was sweet and salty from sugar and fish sauce, and got a nice char in a cast iron pan. Just used store-bought pork liver pate, Best Foods mayo, and the little baguettes from the banh mi joint at Mekong Plaza .

I need to make banh mi at home more often, they're so easy and so delicious. My wife loaded hers with even more chilies, more pickled daikon and carrot, and more cilantro. She felt that leaving out the pork and pate would be just fine with her.

the wife took the reins, she's the mexican expert after all. carnitas taquitos. damned tasty. 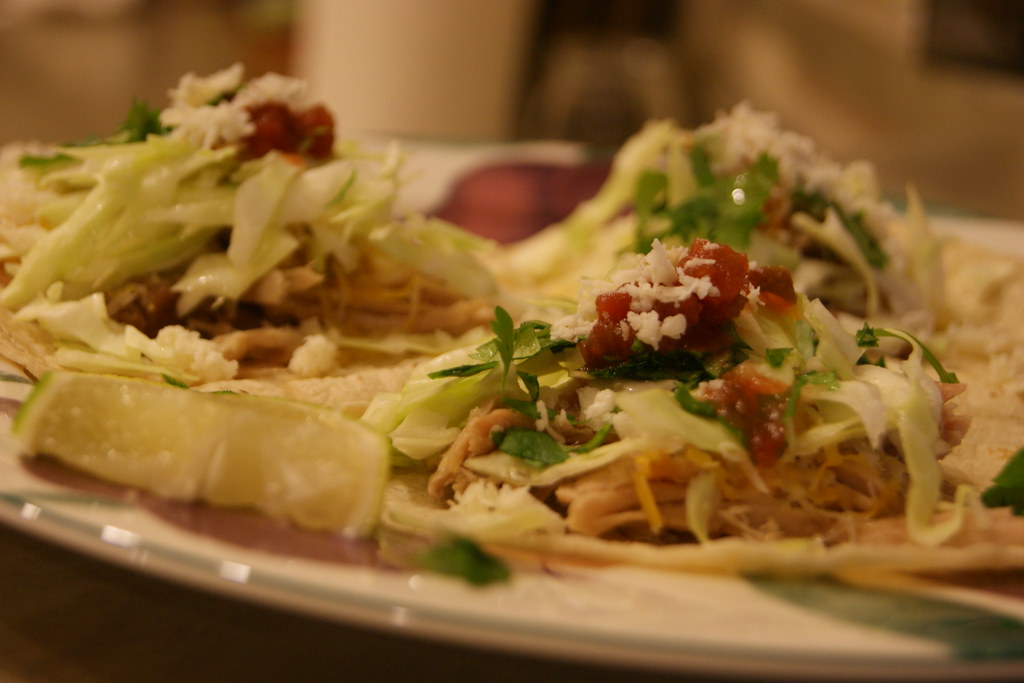 Came across a great recipe for Haitian pork griot in New York Times Cooking. The overnight marinade didn't make much difference to the pork shoulder, but it's braised in the same liquid, which is then reduced and strained while the pork is browned. That sauce (with three kinds of citrus, bell peppers, and habaneros) made the dish and helped out the rice too. Brushing the pork pieces with coconut oil before browning added a lovely aroma that stayed with the pork even when reheated -- do not use olive oil!

Also made Haitian rice and beans (Diri Ak Pwa), which was pretty fantastic, probably due to the tomato sauce (I pureed a can of whole tomatoes), butter, and stock it was cooked in.

The pikliz was really hot and really sour -- added some sugar to balance it out. Good in small doses, but pretty intense.

Eggplant Tricolore from Ottolenghi's Plenty. So simple, and a great way to put a dent in that jar of capers that resides at the back of the fridge. Very tasty.

I love cold weather cooking. For me, homemade chicken noodle soup isn't just the best soup on the planet, it's just about the best dish on the planet. I take my first bowl plain, then add parsley and mashed potatoes in bowl two. I borrowed a tip from Fuchsia Dunlop's Every Grain of Rice and saved the schmaltz from the broth, adding a tablespoon to each bowl.

Second favorite soup: split green pea. Takes all of 10 minutes to prep and 45 minutes to cook. I drizzle mine with olive oil, my wife adds Tabasco. I also like a sausage with mine, in this case a Bar-M Lousiana hot link that's cheap, hot, and salty: three of favorite things.

Khao Soi
Inspired by Mark Wiens videos on Youtube, my wife and I decided to cook Khao Soi at home. (See here and here. And then to get completely blown away about Thai food in general: here. And then watch the rest of Mark's videos.)

I'm really happy we went to the trouble of making Khao Soi -- it was more than worth the effort and a lot of fun working together on it. Some thoughts:

The first night, we used fresh noodles from Lee Lee, and then used boxed spaghetti and fettuccini on subsequent nights. I took some pics of more carefully composed plates, but this half eaten bowl gives the best impression of how rich and amazing this curry is.

Kenji's Mushroom Mapo Tofu. Amazing. Uses both dried and fresh mushrooms, so the mushroom flavor really comes through. Super spicy from the chili oil, and Sichuan peppercorns are used to infuse oil, and then ground and sprinkled on at the end as well. Hot and numbing. I used both the kombu and yacai -- followed the recipe pretty much exactly.

Honestly, it's better than any meat-based mapo tofu I've had. More and more, I think mushrooms are superior to meat.

Just wanted to give a shoutout for David Chang's Bo Ssam from the Momofuku cookbook. I have a smoker and used to try all kinds of rubs, but this is the only approach I use now for pork shoulder. Basically, you shower the pork with as much salt and sugar as it can take, then let it sit overnight or a couple of days. I usually find that half a cup each of salt and sugar does the trick. Mostly I use the oven rather than the smoker these days, but I still go lower than Chang calls for, 250 to 275 until the pork is between 196-200°F. Then sprinkle with more sugar and finish it in a hot oven until it starts to bubble and char. It's not as sweet as you'd think, just salty and slightly sweet on the outside.

The Ginger-Scallion sauce in Chang's recipe is fantastic too, though I always add more sherry vinegar and soy sauce than called for.

The beauty of this recipe is that the finished pork is neutral. You can add whatever sauce you like, and I usually make tacos or pulled pork sandwiches with the leftovers. And use it in stew or a Bolognese (smoked pork Bolognese is awesome).

There is nothing either good or bad but gravy makes it so. - Kevin Hearne
Top
115 posts

Jump to
Powered by phpBB™ • Design by PlanetStyles